Yes folks,Jimmie from thefishingtube.com slams yet another sweet bass from the Kissimmee Chain of Lakes. This bass took the bait and then let go, but a little patience paid off as she came right back and hosed the live wild shiner. 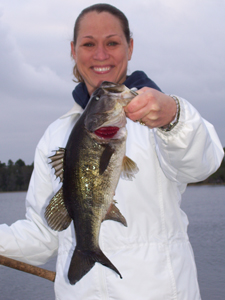 The end of March had seen some very good bass fishing action.

With several days of higher winds, we opted to hit Butler Chain, which gave us 12 lakes to pick from, with plenty of cover from the winds. Most trips out there had been all artificial bait trips, with spinner baits, buzz baits and senko type baits being the best producing lures.

We had a lot of very good action on Lake Sheen, grass beds had been good producers, but for those who wanted some steady action, secondary grass beds were the big key to catching bass. Slow rolled spinner baits thru these areas were very good with some solid and aggressive strikes. Lake Pocket was also holding some good bass, mostly around the docks, where we would skip a wacky rig all the way under them.

The mouth of the canal to Lake Blanche had a few bass beds right along the shoreline, with a few scattered bass on them, and after tossing everything but the kitchen sink at them, including a wild shiner, these bass wanted nothing to do with our offerings, so we moved into the main lake, where once again it was the secondary grass beds, with a good mixture of hydrilla where the bass were holding tight to.

A couple trips to Lake Toho also produced some good action. Most of our time on Lake Toho has been spent in Gobblets Cove and in Friars Cove. Beds were scattered all over the place, with nothing on them, but the females were cruising the areas and very finicky with the bite. Trick worms and blade baits were great for some very good catching, and keeping the bite steady during the day. Running spinner baits thru the thinner areas of lily pads also produced some quality bass. Waters are warming up very nicely now, and we are seeing a lot of bait fish bunching up, which has been giving way to some very good schooling activity. Its top water time folks!!

Yushi catches himself yet another largemouth bass using a wild shiner. Between him and his son they had an awesome day bass fishing on Lake Toho.

December is always a great month for bass fishing in Florida. Cooler temperatures have rolled into Central Florida and sparked the bass to bite our offerings. Live wild shiners and artificial lures are catching some great numbers as well as some very nice trophy bass. Every year I have clients come from all over the world to experience bass fishing in Florida. Europe, Japan , Australia, you name it and they come here. Bass fishing in Florida is famous worldwide simply because we have what many consider the best option of landing that trophy bass of a lifetime.

Disney is always a great vacation stop for everyone coming to Florida and here in Central Florida we have the best Disney area bass fishing around. From lakes such as Lake Toho and Butler Chain, to Lake Kissimmee and Conway Chain, folks staying at Disney are never really more than twenty minutes away from the best bass fishing in Florida.

This time of year there is a lot of live bait bass fishing going on, as many clients prefer to use wild shiners. This is usually a pretty good option as at times it will be a great way to catch good numbers of bass and also increases your chances at that trophy bass that will weigh in over ten pounds.

These and all bas that we catch are always released back to the waters they came from alive and well, simply because we want the next generation of anglers to be able to enjoy the same catching that we have right now.  What happens when you catch that trophy bass that would look great hanging on your wall? Well we take two simple measurements, the length of your bass, and the girth, along with the weight of her and a great photo. With this information you can have a perfect replica of your catch that will last a lifetime.