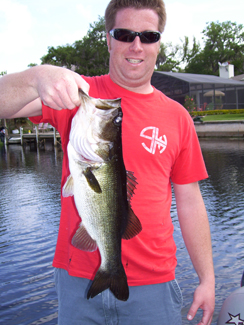 Hit the waters of East Lake Toho for a few hours this morning with Jack.

We ran around a little bit marking a few areas of topped out hydrilla and located a bunch of great off shore grass beds. There was a some action on the surface with bass chasing bait fish around, but it was limited to early morning hours. Our main focus was hitting those off shore grass areas and they paid off pretty good.

Although the bass were a little scattered around, if you were in their general area they were more than happy to take the offerings we had for the. Several bass were boated with soft plastics. Using a wacky rig and lizard but the main baits were a rapala crank bait and the Azuma Shaker Z. Water levels out here looked great and water clarity was perfect. Will be hitting East Lake again soon to toss a few prototype lures around to get them fine tuned.

Got an early start this morning out on Lake Toho. The guys wanted to use live bait today so we meet up at Lake Toho Marina and grabbed a couple dozen wild shiners. We had hit a few areas that had been producing bass for us, mostly on the northern end of Lake Toho. We had a couple misses working the grass lines along Lakeshore drive, before we moved over to Gobblets Cove. Some very good hydrilla out here holding some quality bass along the edges. Pitching the shiners next to the edges is always a good bet.

We worked the residential canal for a few hours, with a few misses and a couple boated, along with this nice solid keeper, definitely a good anchor bass. Winds were calm the first part of the day, but believe me, they picked up pretty good.  Once the winds picked up, the bite seemed to have dropped off. Have a 4 hour run out on Butler Chain tomorrow, another great body of water that has been producing pretty good. 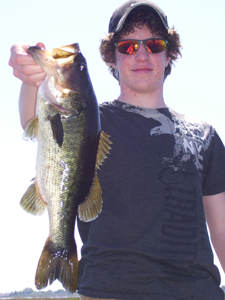 Bass fishing on Lake Toho the first week of April was great.

Several trips out on Lake Toho have produced some good numbers and some good sized bass. For the most part, our clients have preferred using artificial baits and the bass played very good for us. North end of Lake Toho has been a good producer for us, pitching soft plastics along weed edges and isolated drifting clumps of grass.

Mid lake area of Lake Toho has seen some scattered catching for us, most of the bass have come from areas with scattered hydrilla with some very limited bass schooling action. Toads worked thru grasses have yielded some aggressive strikes, when the hooked up was missed, tossing a worm or senko as a back up was the way to catch them.

Gobblets Cove has been the place to be. Grass beds have been holding some steady action for us, as well as scattered or thinned out lily pad areas. The Azuma Shaker Z has been the hot ticket back here for us. The bass have hammered this lure hard! Spinner baits have also been producing pretty well out here as well. Tossing to back side of lily pad fields and slow rolling them thru the pads has been very good, once you got the hook up, holding the rod high until you worked them thru the pads has been the trick to landing your catch.

Southern end of Lake Toho has still produced some bass for us, although as of late it has been more of a one here one there kind of bite. Friars Cove had been the best area south for us, mostly in the area of the cypress tree lines. 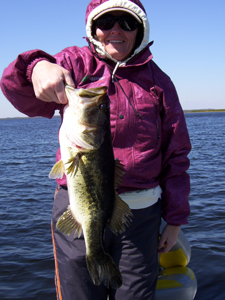 The first week of March has some good bass fishing on Lake Toho. With our trips being of mixed nature, some with live wild shiners and some with artificial baits, this body of water has not let us down. Lake Toho has been fishing great this year. Many may think when a cold front hits, you need to switch to wild shiners in order to catch bass, but we have done very good using artificial baits to consistently catch the bass out here. Beds have popped up all over the place out here, in waters from under a foot deep to 5 foot deep. For the most part, the bass we have spotted around them have been cruising around. Gobblets Cove, Friars Cove and Whaley’s Landing area have been some good hot spots for us. Baits of choice have been 7 and 10 inch worms, steel shads and one ounce spinner baits. Water temperatures have been running from mid to upper 50’s, but with the warming trend we are looking at for the second week of March the waters should be hitting mid 60’s easily. This will trigger some great bass fishing action and make for yet another very productive week out here.
Capt Tim Fey 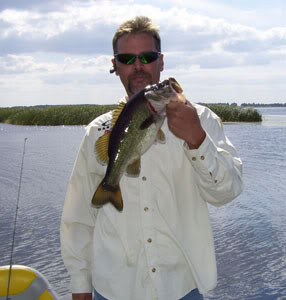 The first half of November we spent a lot of time on Lake Toho doing some scouting and checking out lake conditions. There is a lot of matting out here and if you hit the right ones, you can catch some good numbers and size out here right now. Water temps are finally down, in the upper 60’s on the days we hit this great lake.

A few of the days we hit Lake Toho the winds were up some, so we focused on areas where we had a push coming thru cuts in the matting, and the bass were there and played pretty good for us. We had a good spinner bait bite going on as well as a wacky rig bite.
Open water areas that were holding bass produced pretty good with the Steel Shad as well as the spinner bait. Silver steel shad and a 1 ounce spinner bait seemed to be the most productive lures for us and bass seemed to be pretty aggressive when they hit these lures.

Northern end of the lake seemed to be the most productive area, with a few coming out of Gobblets Cove and a few scattered from the southern end.
Lake Cypress also seemed to be a good option, as we made a few runs down there and always managed to catch bass down there, with very little pressure on the days we were there, I think we may have seen 4 other boats there on the days we made the run.
Check back often as we will be adding more to this report for the last half of the month, with several trips coming up for lake toho. Also be sure to check out the bass fishing videos, as 2 more have been added from Lake Toho.