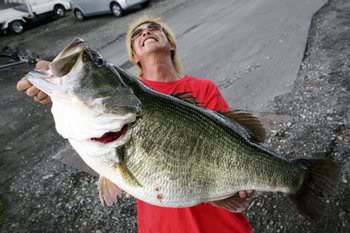 Japan’s Lake Biwa, one of the oldest lakes in the world, may be claiming a largemouth bass that might tie the oldest and most cherished all-tackle world record in freshwater fishing.

Reports indicate that a 22-pound, 5-ounce bass (10.12 kilograms and 73.5 centimeters in Japan) was caught by Manabu Kurita, a pro angler who represents Deps Tackle Company in Japan. He was fishing in massive Lake Biwa in the Shiga Prefecture of Japan. Girth measurements were not given in the reports, but there are several pictures of the bass posted on various Web sites. And the bass was reportedly weighed on a certified scale.

It’s been exactly 77 years and one month since George Perry caught a 22-pound, 4-ounce bass out of Montgomery Lake in Georgia on June 2, 1932. It has been the International Game Fish Association all-tackle world record ever since.

It’s been exactly 77 years and one month since George Perry caught a 22-pound, 4-ounce bass out of Montgomery Lake in Georgia on June 2, 1932. It has been the International Game Fish Association all-tackle world record ever since.

“I heard about it, but we don’t have any details,”
said Jason Schratwieser, the IGFA’s fishing records and conservation director.

Schratwieser said the bass would have to be 2 ounces heavier than Perry’s catch to establish a new record.

“It will tie it if that’s the weight,” Schratwieser said, indicating that IGFA rules stipulate that for record fish weighing less than 25 pounds, the replacement record must weigh at least two ounces more than the existing record.

“It looks like the real deal,” said San Diego County bass angler Mike Long, recognized as one of the top big bass anglers in the world. “The girth looks right. Everything looks right about it.”

Said Ken Duke, senior editor for BASS publications: “It seems closer and more of a real deal than any situation we’ve seen.”

Lake Biwa is Japan’s largest lake and covers more than 259 square miles. It’s also said to be one of the oldest lakes in the world. It is surrounded by mountains and famous for its scenic environs. Its crystal-clear water is more than 300 feet deep.

The previous Japanese bass record weighed 19.15 pounds and was caught by Kazuya Shimada from Lake Ikehara on April 22, 2003, on a swimbait.

Many thought the next world record bass would come from a California reservoir that gets stocked with trout. Dixon Lake in Escondido, north of San Diego, served up a 25-pound, 1-ounce bass in March 2006, but angler Mac Weakley of Carlsbad inadvertently foul-hooked the bass and never submitted it for record consideration.

Other Southern California lakes such as Mission Viejo, Lake Murray and even Lake Cuyamaca, because of the amount of stocked trout they get, have been considered contenders to turn out a world-record bass. The larger bass eat stocked trout and get much heavier than bass at lakes that aren’t stocked with trout.

Diamond Valley Lake also is considered a top candidate for producing a world-record bass. It is stocked heavily with trout, but bass fishermen must work from rental boats there. The lake’s launch ramp is out of service due to California’s drought conditions.