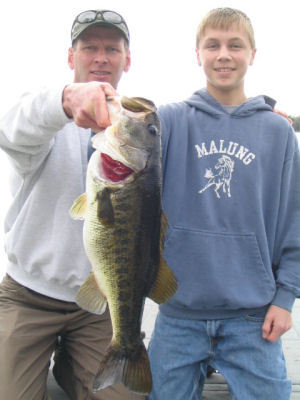 Here we will touch base on the different seasonal patterns of Bass Fishing in Central Florida. Here in Central Florida, bass fishing is a year-round event. I will start with what I consider the best season for bass fishing in Florida, Fall/Winter season. As fall approaches us, water temperatures will start to fall from the sometimes highs of the mid to upper 90’s at times, to the perfect top water action of the mid 70’s. This we find to be one of the best times of year to get in on what is definitely one of the most productive times of year, as the shad and wild shiners start to really school up and the bass start feeding up on them in an aggressive manner in preparation of the up coming spawning season.

The fall season can be a spectacular time of year to be on the water, as bass are feeding up on their main forage, they can be easily enticed into some serious top water action baits such as Toads, pencil poppers, prop baits, and the list goes on and on. With the never ending wide range of top water baits, your day on the water can always be eventful and exciting.
Florida is probably the hottest destination for fall/winter bass fishing, as the weather is not really known to be as harsh as far as getting cold, and you can still be very comfortable out on the lake, without having to pick ice out of your rod guides after every few casts. Although, even in Florida we do get the cold fronts thru here, dropping the air temperatures to the uppers 20’s at times, the days usually warm up very nicely to the mid 60’s
Winter bass fishing in Florida as many know, is the place to be. Florida is known world wide as “The Bass Fishing Capitol of the World” and with the BassMaster Classic of 2006, record setting weights, and ten pound plus bass being caught, Florida will remain at the top of the list for many years to come. Lake Toho and Lake Kissimmee are usually the hot destination for many anglers in that never ending search for their first ten pound plus bass, and during this time of year, plenty are caught.
Winter months in Florida brings cold fronts, dropping water temperatures to the mid to upper 50’s. This will push the bass in most Florida lakes tight to cover, or in the case of the Butler Chain, which has a total of 12 lakes interconnected by canals, into deep holes. This time of year many anglers are coming and requesting live bait action, which can be probably the easiest way to catch that Trophy Bass in Central Florida, but with those deeper waters in Butler Chain, it also allows the northern angler the ability to employ tactics they may use on their home waters, such as drop shot, and jigging spoons to catch bass.
The winter months also mean spawn season, January and February can hold some of the hottest and best action, along with what can be the best possible chance at that trophy bass everyone is looking for. The bass have gorged themselves on shad and are fattened up and full of eggs, this is generally the time of year when they will be the biggest of the season. 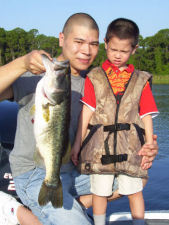 Spring has been another great time for some serious bass fishing action in Florida. This time of year, bass are once again feeding up on their 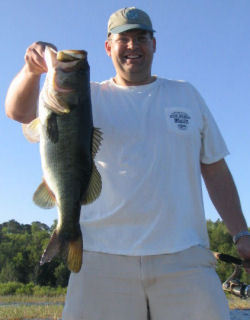 natural forage, shad and wild shiners, getting back to their normal weight after the spawn. This can and will see a lot of top water feeding going on during the day, which means some great top water action, our favorite top water baits will be buzz baits, and top water plugs produced by High Roller Lures. Early part of spring, you will still be able to catch a few bass that are still on beds or just coming off the beds, numbers caught will generally run anywhere from 15 to 35 bass per day, size of your catch can range from 2 to even 10 pounds, remember, your in Florida now, and on any given cast, you have that possibility of landing that trophy bass.
Summer bass season in Florida is the often overlooked season. With the dog days of summer, people generally think the bass bite is gone with only catching bass here and there. But this has been proven wrong time and again, as some big bass will continue to be caught even in the hottest part of the day. Some of the biggest bass during the summer months, bass in the 7 to 10 pound range have been caught between the hours of 11AM and 3PM. Typically the fishing pattern will be top water baits early in the day, and slowly progressing to a flipping bite, this will generally be when you will stand the best shot at getting that trophy bass during the summer months. Trip lengths generally run 4 to 6 hours due to the heat, and typical afternoon thunder showers, but we do get those hard core anglers that will fish all day.