June is the start of our heat, and most people think the bass fishing season is over. This is far from the truth. Early morning action is still very good. Live wild shiners will still get good numbers of bass and some scattered size to five pounds. As the temperatures warm up during the day, the bite will get more scattered, but with targeted casting you can still catch largemouth bass during the heat of the day.

Lake Toho bass fishing is world famous for catching trophy bass, even during the summer months. This is where flipping and pitching will come in handy. Your focus in the heat of the day will turn to focusing on grass beds and floating mats, either punching thru or pitching your baits into “potholes” to target trophy bass. Idea baits are creature baits and tube baits. 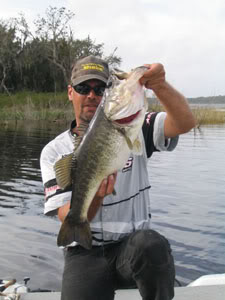 The Spawn is on! This is the official start of the bass spawning season. Largemouth bass have feed up good the previous two months and have taken their place in the spawning areas to nest. Here in Florida we have a very great spawning season, starting in January and running into March and sometimes April. We have on rare occasion caught a bass from a bed as late as May!
This is our major spawn, as bass beds will be scattered all over our lakes in waters ranging from as shallow as a foot deep to sometimes twelve feet deep depending on the body of water you may be fishing on.

Wild shiners are usually the bait of choice, as bass will attack them if they get anywhere near the beds. Although wild shiners are not always required to catch these trophy bass, they can at times make things easier. Creature baits worked on beds holding bass can and will produce vicious strikes from big females, as they protect the nest. Numbers of bass caught will remain steady, but size will increase, as it is not uncommon to consistently catch bass from five to seven pounds on a daily basis, and here in Florida, especially during the spawn, any given cast can result in that trophy bass of ten pounds or more.

Lake Toho and Johns Lake are very well known for producing some amazing catches during the spawn, with five bass limits easily approaching 30 pounds during tournaments. This is probably one of our best and without a doubt one of the busiest months for bass fishing. So if your looking to fish, you may want to consider booking soon.