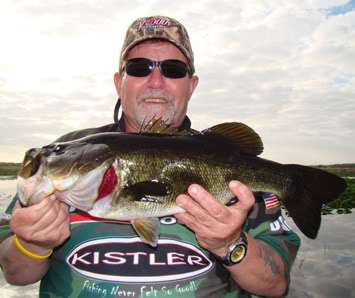 Paul on day three had his good friend Dave join us on Lake Jackson once again. Dave started out working live bait while Paul worked an arsenal of artificial baits. Tossing creature baits from zoom brush hogs to the Gene Larew Biffle Bug Paul worked it hard. Main artificial baits to produce once again was the senko type baits.

Dave had been catching some good numbers using live wild shiners and we slowly switched him over to the Yum Dinger as he had not bass fished in as he says about 20 years. Well let me tell ya folks, Dave hooked a sweet bass that would have been an easy 10 pounder with no doubts, but the hook pulls out just a matter of feet from the boat. Just minutes later Dave is working the Yum Dinger perfect, as a massive wake comes along and SLAMS his bait and the fight is on!

Dave was working this bass perfect, she was definitely bigger than the one he had already lost on the pulled hook, and as her back came out of the water all I could think was she is even bigger than the 11.4 pound I had caught. This baby started rippin drag and makin the reel screen, and then it happened, she got around the one darn grass patch just ten feet from the boat, wrapped herself around and shook loose. Paul and I could have sat on the deck and cried, and Dave says “ That was cool!!”

It was a great bass fishing day despite the two trophy bass getting away from us, and will definitely be a day Paul and Dave will never forget. Paul is back home in Texas and has already called me to tell me he is planning his return trip for next year.