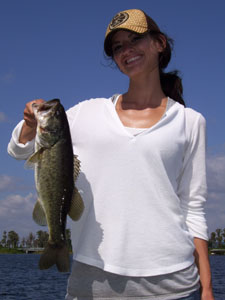 September has seen some great fishing for us. We had spent several days on Johns Lake and Butler Chain, as well as once again mixing things up by doing some saltwater trips in Port Canaveral and Merritt Island Wildlife Refuge.

Freshwater trips have been with artificial baits, mostly using Gitem Curly 7’s and Gitem K.O’s. Main colors of choice have been Florida Grass and Green Pumpkin, steel shad has been a very good producer as well when we have had to hit deeper waters for our catch. Butler Chain had been pretty steady working docks skipping a wacky rig K.O under them, with water levels up, the number of docks that we are unable to skip under have dwindled, but the ones you can get under have still been producing. Lakes Chase and Tibet have done well with the steel shad at the mouths of the canals and around drop offs, working areas in 10 to 16 foot of water.

Johns Lake has seen some schooling action, although the days we were there it was limited, they would surface and be gone within 15 minutes. Spinner baits worked thru the vegetation, scattered grasses and offshore hydrilla, has been a good bet at catching some quality bass, 7 inch worms worked thru thicker grass, slowly swimming them along the top of the slop has produced some very good strikes. Like Butler Chain, Johns Lake is up, and ramp is flooded, so be ready to wade the walkway to get to your boat after launching it.

Pan fish, brim and bluegill have been doing good on red wigglers and have hit fairly good tossing beetle spins both at Johns Lake and Butler Chain. Crappie have been scattered, but when you locate them, the size has not been too bad, with some coming in close to 2 pounds, bigger ones seem to be coming from Johns Lake, and mainly in deeper waters. 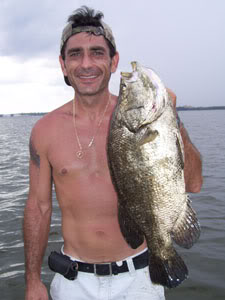 Saltwater runs have been nothing short of a total blast, Port Canaveral has had the best mix for us, catching snapper, jacks, blues and a few trout. The Wildlife Refuge has be super. We managed to catch a wide range of fish out here to include snapper, trout, a few small reds, and Erik capped off the trip by catching a very nice 22 inch Triple Tail, yet again, another first for him, great Job Erik!

We actually ended the month with our first cold front, or should I say “cool” front so maybe it’s a sign like last year, waters will cool down sooner turning on yet another season of some good topwater action. Water temps for the most part have hung in the mid 80’s with the consistent rains we have gotten which has helped to maintain a good bite for the most part of the summer. October is shaping up to be yet again another fabulous month for bass.